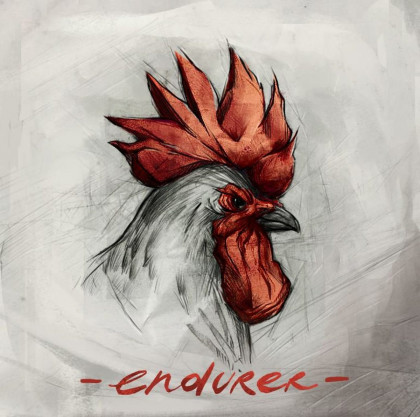 The most complete Bulgarian metal release to date

The lack of modern bands in Bulgaria always makes me sick, but 8m/s and As Orchids Wither are just damn outstanding. Overall these guys are putting a lot to effort to elevate the home scene, which I must say is hungry for modern metal. I am absolutely sure that a place like the Bulgarian metalcore scene, which sucks by the sheer fact that it is being suffocated by tributes and hate by the “heavy metal” fans can only be changed by such high quality records. When you listen to it, you can hardly guess that record has been produced in an Eastern European country, Endurer grooves, it has melody and a good job in making you move. Until now 8m/s have released 2 studio albums (Borders pt.1 review) and both of them were absolutely crushing. On the other hand As Orchids Wither have one EP (check it out), which is quite good. Quite frankly here both bands deliver a much more complete approach to the music, Endurer their best effort to shine and they do it flawlesly.

Check the album from 8m/s‘ side:

Endurer (Split with As Orchids Wither) by 8m/s

Check the album from As Orchids Wither‘s side:

Endurer (Split with 8m/s) by As Orchids Wither

8m/s delivers the hardcore punch, while As Orchids Wither give us the djent, Endurer is a new favorite

Well I love both styles the bands play, no doubt about it, and I can surely say that they have both made a musical achievement. Seriously, Bulgaria hasn’t had such a good metalcore album up to date, the compositions are of high quality and the sound is awesome.

There is something extremely cool about 8m/s‘ music. First, Endurer sounds like the guy in the speaker wants to come to your doorstep, kick you in the ass, because you suck and don’t do anything to fight injustice in life. Then comes the instrumental work, where you have complex cascading riffs, brutal breakdowns, tempo changes and contrasting moments. Ah, it pumps me up, great stuff, it is extremely fast and aggressive, a lot of Meshuggah as a vibe here. Not to mention their sound is just awesome, raw and punchy.

When I heard As Orchids Wither for the first time, I think it took me something like 2 weeks to get used to the fact that they are not an American band. On their side, they have created more modern compositions – they djent, and their riffs are more melodic. It is astonishing that all that complexity they have put together sounds so well bond and complete, their vocal work is just brutal and the instrumentals are crushingly well recorded. Their transitions are so seamless, that I heard the album 2 times before I saw it had rewind, awesome.

Ok, 8m/s part has been recorded in Sound of Thunder Records and As Orchids Wither‘s sound was produced by PhyX, both productions are damn good. What I can say for 8m/s‘ sound is that I seriously love how punchy and in the same time pleasant to hear are the drums, especially the snare (that snare drum!), the mix is amazing. The dynamics of the bass guitar together with the other instruments is just flawlessly well put, their sound is very well compressed and full-bodied. As Orchids Wither have a more open sound, as their compositions feature more tapping and arpeggio riffs, they also have synths, harp and industrial elements, really cool stuff. Their palm-muted chops are really clear and the drum work is also fantastic.

Overally both performances are amazing. Endurer is the best Bulgarian metal album to date for me.