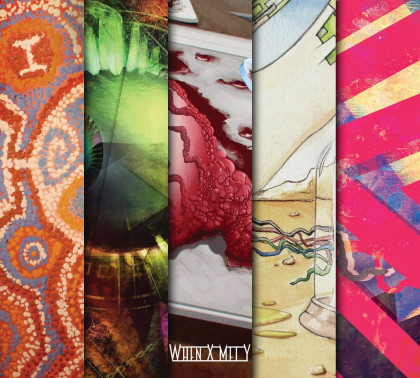 Thinking that is a remaster of an album from 2012, I feel I have missed a great piece of art.

There is nothing more catchy and mysterious, leaving your mind with questions and thoughts like: “Am I missing something?” , actually being Surealistic. Yes you do, If you skip this peace of djent.

I would not say this is another awesome band from France. When I saw the album cover, I thought: “Salvadore Dali, this will be interesting”, then I listened to every song of this record When X Met Y (Reproduction sequences maybe?), I decided that this direction of art is wired to their music in a very deep level, and with every song The Dali Thundering Concept shows how twisted, absurd and insane our reality really is, but in the same time madness can be overcome only by human mind, will and determination.

When X Met Y (remastered) by The Dali Thundering Concept

When X met Y twists and breaks the boundaries of art

The surrealism actually is art that is trying to resolve contradictory positions of dream and reality. When you read the lyrics you may suggest that in the most part, the album is about the realistic dream that we are all sunk and it’s swallowing us slowly but surely. It sounds simple and cliche, but when you read the lyrics it looks real and dangerous. Isn’t this true we`re all in danger, often in our most comfortable moments. Of course, we must feel ease at times, we need to rest and reload our powers, but the trap of false confidence is always behind us.

Some of the Lyrics:

“Jump out of mum’s pussy to live in a factory That’s what destiny gave us for a living From the cunt to the soil It’s the routine of a continuous toil We are all slaved by normality All average to serve society You see cuffs on your wrists But you’re too lazy to be pissed Oh come on and Release the hatred Puke it out, puke it out Breathe the wrath” (Abstract Art: From chains to inasanity)

Dudes, you are sick, give me more!

But enough with “philosophical bull shit”, let’s talk about the album’s musical concept. The record features the typical djent sound, but also adds something unique to the vibe. Songs are harsh and melodic simultaneously. If there is a convention about djent music and how you can construct it, maybe these guys come close to it. There are incisions, rude breakdowns, regular/irregular time signatures, clean guitar progressions, smashing transition and accelerated riffs. The cooperation between pure singing and growl vocals is well put in the mix, contributing to the complete feel that has been achieved in the production. Rude, groovy, punchy, rhythmically complex and dissonant with a little pinch of grindcore. The correct amalgamation between heavy and soft sound of metal.

Enough with me, When X Met Y, check it out!