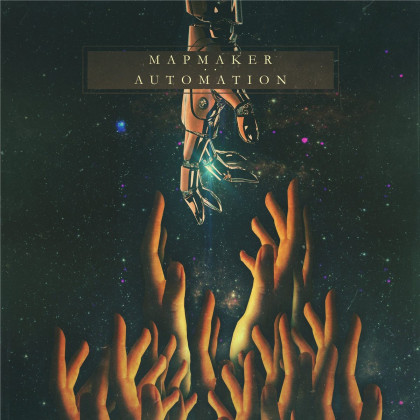 That is one brutal musical roller coaster

These guys’ first album finds itself in a style that you will realize it exists – Sci-fi progressive deathcore (yeah, and it djents!). That stuff is crazy, you know, it will make you groove hard, it will make you turn up your volume and start breaking stuff. Automation is a very solid release.

Mapmaker as a band is small, yet so talented, they are from Indianapolis and this is their first album. I heard they have something coming soon, so I decided to review “Automation”, which for me personally was ground breaking and got me hooked for something like two weeks. I started listening to Sci-fi heavy metal because of this LP.

You can check the album here:

Heavy progressive is one very hard sphere to grasp, Automation is a genre definite

The album features some very high quality riffs that are really interesting and the bass solos really put you in surprise.

I really enjoyed the breakdowns, bone crushing, enough said. Vocals are brutal deathcore growls that just keep it tight and intense, there are some unexpected really well put things along the way in that aspect.

The ideas and composition get a little bit chaotic sometimes, but still manage to sound well put together and complete as compositions. That album has that amazing grip and atmosphere that really gets you out of the comfort zone – it has deathcore, progressive, jazzy feel and the most important – it is a SCI-FI story, which will literaly blow your mind! Mapmaker, you got the spirit.

Sound itself is pretty clear, yet somewhat raw, which makes it feel unique. I suppose they will come out with a more polished and better mastered album in the very near future. It is crunchy, and has that really hard punch.